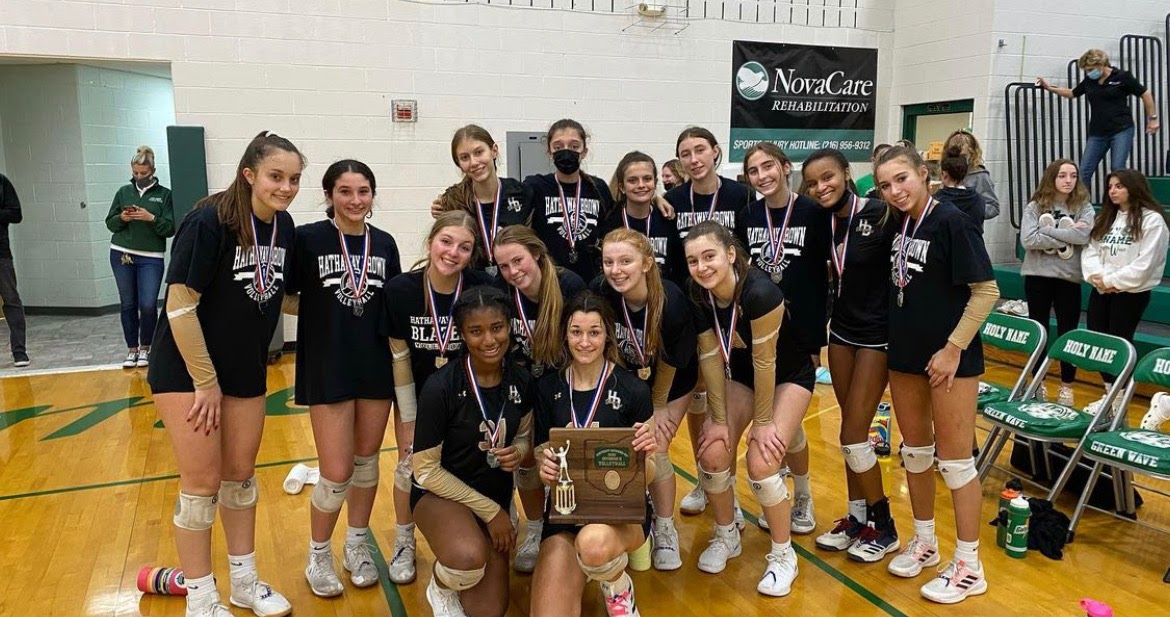 Let’s start off by saying that for the first time since at least 2006, the Varsity Volleyball Blazers have won not one playoff game, but TWO—for the first time! We are both members of the team, Colleen being a sophomore and Abby as a freshman! Although these wins may seem small and minor, this is the start of a new winning volleyball program for the entire school.

First Ever Trophy Award for Hathaway Brown Volleyball Program :: runner up for district finals after taking Beaumont to five sets

Volleyball has been notorious for obtaining a new coaching staff each year. But with our new family of coaches, Coach Mike Maurer, Nicolette Maurer, and their son Cayden, we have begun a new chapter in the volleyball books. They have taken our team to new heights and brought us guidance and mentorship to a series of record wins in playoffs. The volleyball team took their first district runner up trophy home a few weekends ago, for the first time in Blazer history. After winning three playoff games, and becoming one of the first teams since 2006 to make a good run in the playoffs, it is clear that our team is a force to be reckoned with. Our team captains, Ali Gibbs and Meghan Gannon brought the team to a new level of hype and camaraderie, and with the help of a boom box, our pre-game locker room routine will be a tradition that will continue as a new varsity team arrives each year.

With a generally young team for the last two years, it was vital that our juniors were ready to step up as leaders of the team. Juniors Carmella, Gabby, Issy, Emily, Maddie, Gabby, and Meghan brought the team to a new bar, and guided sophomores Lauren, Meredith, and sophomore swing Colleen throughout the season.

Our freshman swings, Elsa, Chloe, and Abby knew just how to kick off each game, not only by jumping in during intense playoff situations, but worked to help out wherever they were needed.

And finally our seniors. Ali Gibbs and Cami Fielding lead the team as our only seniors this season. They not only brought laughter and energy to the court, but led the team consistently in defense and offense. Our volleyball program could not have excelled so much this season without the mentorship and drive of the two girls.

Our junior varsity team was one of our most successful yet, with a win against another school’s varsity team, it was clear that this small, but mighty team was not going to back down. Led by captains Colleen Nakhooda and Taryn Kucharski, the team was able to take a 15-7 record for the year and has created a basis of freshman and sophomores that are ready to build up the varsity program in the next few years.

We had our first ever freshman team this year with captains Bailey and Annabelle. They started off a new era for the future freshman volleyball players. The players included Davione, Isabel, Annabelle, Shannon, Priyanka, Lindsey, and Sam. They played with heart and spirit throughout the whole season and set a high expectation for players to come.

Here are some stats and individual mentions and awards for the season:

*** Our coaching staff came second in the state for coach of the year as well! ***

Overall the volleyball program as a whole reached new heights, and we are all excited to see where the future of the sport will go in the next few years. Stay tuned for our new edition next year!! And congrats to Blazer’s Volleyball!!