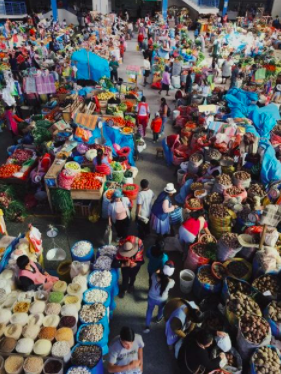 We Waste Food, A LOT Of Food

It’s no secret that Americans have a growing problem with waste in general. According to the American Environmental Protection Agency (EPA), the average American produces 4.51 pounds of waste per day. In 1960, the common American would only produce 2.68 pounds of daily waste. Waste production was on an upward trend for over 40 years, until things started to level off in the 2010s. An increase in awareness of waste and the environment also became mainstream at the time. Although awareness is only the first step in addressing the food waste emergency.

The increase in food waste alongside the growing number of food deserts across our country are not isolated events. Food deserts occur when it is difficult to find fresh, high-quality foods in an urban setting. But those areas are typically abundant in fast food chains serving foods that lack good nutritional value. This creates a major problem for children growing up in food deserts because hunger can deter a child from reaching their full academic potential.

Food insecurity affects roughly 1 in 7 households across our nation, and a total of 23.5 million people live among food deserts in America. Contrary to that, the everyday American family will waste 25 percent of their food every year. Joi Sears from the Triple Pundit puts it best: “[Our] trash cans eat better than 25 percent of the world’s children.”

What YOU Can Do Today

Surprisingly, we can do a lot of things to help mitigate the negative effects of food waste in our country. Finishing what you set out to eat and eating things in portions is a good start. But beyond that, work on finishing what you have at home before taking another trip to the grocery store. You can also compost to help promote the growth of other foods, and donating foods, as long as they’re in good condition, helps too.

As the world’s population continues to rise along with the cost of food, we must be diligent in how we cultivate and distribute our finite supply of food. There are many threats to agriculture on our globe right now, like water scarcity and climate change. Doing your part to help conserve the world’s food supply and protecting the environment that we share with the food we grow goes a lot further than you and I could ever imagine.

6 thoughts on “The Issue of Food Waste in America”