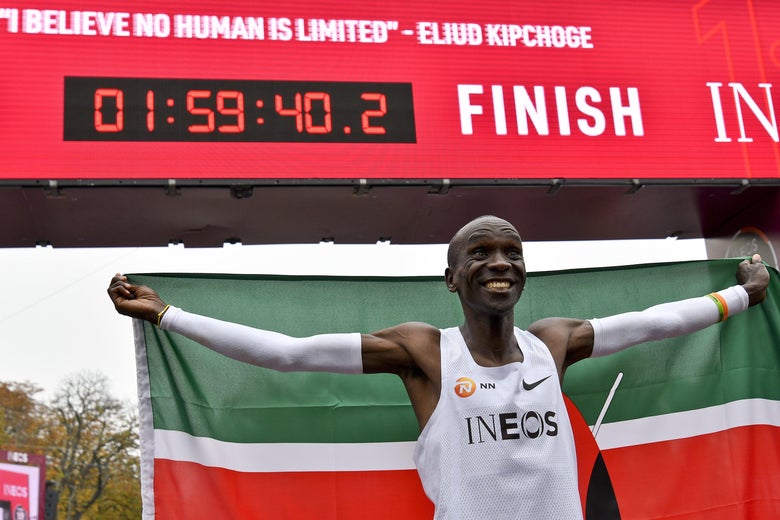 For those of you who do not know on Friday October 12th, history was made not just in the running community but also around the globe.  A marathon runner named Eliud Kipchoge ran what was the first human to ever run a marathon in under two hours coming in with hot heels at a whopping 1 hour and 59 minutes.  His official race time was 1:59:40:2 !!!!! Eliud was not alone in this journey, and in fact he had about 41 pacers that ran with him throughout the marathon to keep him on track.  There were many more people and much more time put into this amazing feat outside of race day.

Eliud started his training at least four months prior to the marathon, and he has been running and training for marathons for 17 years.  The course was planned to be run in Vienna, Austria because they have great weather conditions, suitable for Eliud’s standards. His training camp is in Kenya where for the past four months he has been eating, sleeping, and training with one goal in mind: a sub 2 hour marathon.

In terms of diet, Eliud and his pacers followed what was traditional in Kenya, where they eat foods such as:

Surprisingly, their diets lacks a lot of meat because it is considered a luxury in Kenya. Other things the runners eat include; cabbage, beans, rice, bread, eggs, and fruits like bananas.

In the past Eliud broke the world record during the Berlin Olympics in 2018 where he ran a 2:01:39, then in London he ran 2:02:37.  The last time he attempted to break the 2 hour marathon barrier was in 2017 when he ran a marathon at a race-track in Monza, Italy. He completed this marathon with pacers, cars, and the whole nine yards in 2:00:25.  This, obviously was not good enough for Eliud as he continuously sets out to run a marathon, with his life goal of doing it in under 2 hours. To give you some perspective on how fast Eliud was running throughout the race here are some of his splits:

Overall this was an amazing day in history and will allow Eliud Kipchoge to be known as the greatest marathon runner in history.

“This is about history. It’s like the first man to go to the moon. My main message to the world is that no human is limited.” – Eliud Kipchoge