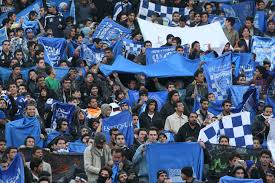 In Iran, women are not allowed to attend sporting events or enter stadiums. They have not been allowed to do so since the 1979 Iranian Islamic Revolution. This law, coupled with one stating that women are not permitted in public without a hijab, were simultaneously broken by Iranian soccer fan Sahar Khodayari. Khodayari, nicknamed Blue Girl because of the color of the team she supported, challenged these laws when she disguised herself as a man to gain entrance into Iran’s Azadi Stadium. This rebellious act turned out to have dire repercussions which are now shaping the femenist movement of Iran. Khodayari died after setting herself on fire in front of the court where she was set to receive six months in jail…for simply attending a soccer match.

The Blue Girl now stands as the symbol for the Open Stadiums Movement. This campaign has been active for the past 15 years and describes itself as “A movement of Iranian women seeking to end discrimination & permit women to enter stadiums.” Today, the Open Stadium Movement represents a general fight for women’s rights in Iran. The blue woman’s suicide served as a blatant example of the damages that a mysogynistic, both through culture and law, society can afflict on the oppression of women.

To any one of us, it is exceedingly difficult to imagine being in Khodayari’s shoes. The thought of not being able to attend a Cavs game or cheer the Browns to victory (for the first time in what seems like a century) simply because you are a woman seems absurd. The Blue Girl’s demise is communicating to women that they are not allowed to even exist in a public space. Her death feels outrageous, because in our minds it seems so preventable. JUST LET WOMEN IN.

After the Blue Girl’s death, the Open Stadiums Movement is being taken much more seriously than it has been for the past 15 years. The story has trended all over social media, and the world has finally began to take action. Famous football teams such as FC Barcelona have addressed the Blue Girl’s death and stressed the importance that “Football is a game for everyone – men AND women, and everyone should be able to enjoy the beautiful game together in stadiums.” Alongside these teams’ support, Iran has assured FIFA that women WILL be allowed to attend the World Cup qualifier in Tehran on October 10th.

Open Stadiums stated that “And now, with the stadiums, it’s some sort of a symbol for women—if they can go to the stadiums, it means they break one of the walls in front of them. It will happen. You cannot stop us.” The opening of stadiums, they hope, will be a catapult to women’s rights in Iran. The freeing of women like the Blue Girl from the confinements of a misogynistic political system.