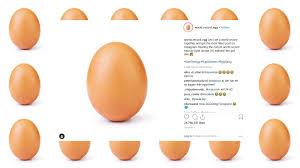 On January 4th, an Instagram account called @world_record_egg posted its first picture. It featured an ordinary egg with a white background and the caption, “Let’s set a world record together and get the most liked post on Instagram. Beating the current world record held by Kylie Jenner (18 million)! We got this.”

The egg overtook Kylie’s record in just 10 days and kept climbing. As of today (January 23), the egg had 50,756,881 likes. It, along with airpods, Birdbox and “and it shows” have become some of the first memes of 2019. It even has a Wikipedia page and, at one point, official merch (though you can still find t-shirts with the egg on them).