This past weekend I attended the infamous Ohio State vs Michigan football game in Columbus. One of my best friends is a sophomore there, Jessica, and was shocked when I told her I had never been to an Ohio State game before. We decided to go big and go to the most important game of the year. It was the best game Ohio State has played all year. It was one I’ll never forget, partly because it was probably the best Ohio State vs. Michigan game ever. If you missed it check out the highlights here: https://www.youtube.com/watch?v=nBUW0l-3wLg

We sat in the student section, the perfect place to get hype and celebrate all eight touchdowns we scored.

Jess works for the Red Cross and got to be in the halftime show!

We rushed the field when the game was over! 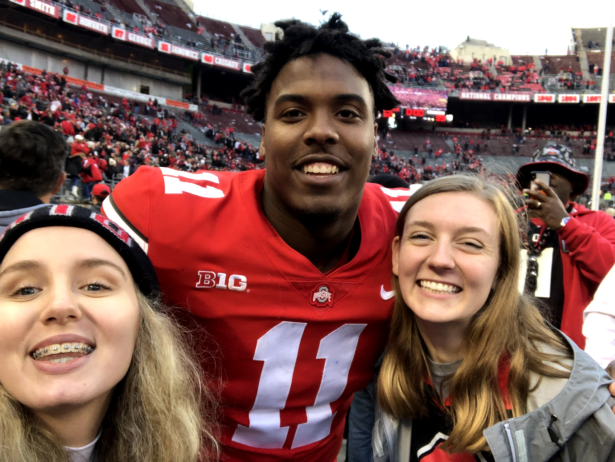 I don’t mean to flex on ya’ll, but you know we had to get a picture with Tyreke Smith who went to Cleveland Heights!

If you haven’t been to an Ohio State game and you love football, I really recommend going to an OSU game, they really are unreal. You haven’t lived until you’ve been in a stadium of 100,000+ people cheering for the same team you are and singing Mr. Brightside.

In conclusion, just remember ladies, if he:

He’s not your man. He’s a Michigan football player.