Happy 2018 everyone!! As the new year has begun, I’ve spent my time scrolling through twitter and looking through the memes of years past. I’ve compiled a list of my top memes for you to look at and reminisce about the past year.

As Obama’s presidency came to an end at the beginning of last year, a new meme began circulating the internet that pictured President Obama and Vice President Biden joking about their time in the White House and make jokes about the incumbent Donald Trump. Obama even tweeted one out. 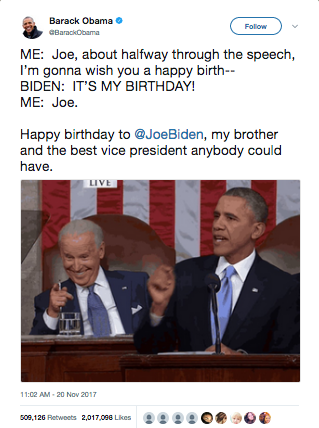 2. Nothing But Respect for My President Meme

This is one of the more controversial memes on the list. It all started when a Twitter user by the name Makenna posted a photo of herself cleaning President Donald Trump’s Hollywood Walk of Fame star, which had been defaced numerous times since the election. She captioned it: “Nothing but respect for MY president,” adding the hashtag “#RaisedRight.” Many people responded with their own versions of the tweets, posing with other stars on the Hollywood Walk of Fame with the same caption.

3, What in Tarnation Meme

This meme originated back in February, originally mocking the southern slang term, it quickly became attached to the picture of the dog with the cowboy hat. The hat was then applied to other common objects to create a pun on the word. There’s really no way to describe the memes that followed. 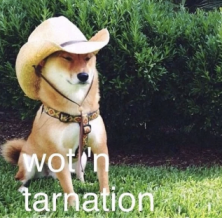 The picture of SpongeBob used for this meme comes from the episode “Little Yellow Book,” In the episode, Squidward reads SpongeBob’s diary, where he discovers that whenever SpongeBob sees plaid, he acts like a chicken. May 5th, Twitter user @lexysaeyang posted the same picture, and added a call-and-response, alternating capital and lowercase, caption that was meant to be mock the first part of the tweet. 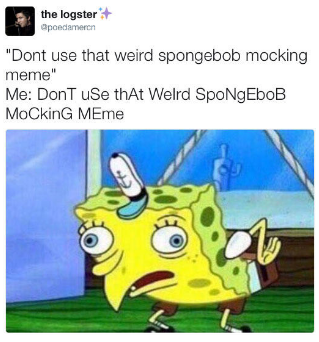 A stock photo of a man holding hands with a girl while simultaneously checking out a different girl went viral towards the beginning of the school year. It’s really just something that you have to see to understand.

In June, BBC Three uploaded a mini documentary to YouTube as a part of their Hood Documentary series. “Roll Safe” refers to the character of the screenshot. It pictures him grinning and pointing to his temple. The meme is usually captioned with various jokes mocking bad decisions or ideas. 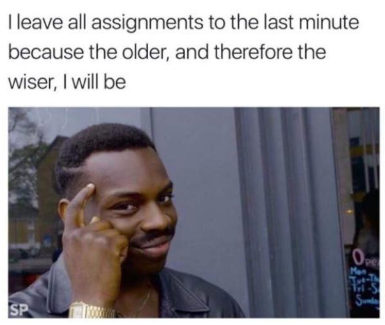 This meme has less interesting origins. The guy pictured is named Drew Scanlon, who’s a podcaster. The gif comes from the GiantBomb video “Unprofessional Fridays.”in reaction to another podcaster, Jeff Gerstmann, saying “Farming with my hoe” while playing a game.

8. Cracking Open a Cold one with the Boys

Back in January of last year, a bunch of accounts were made referring to “cracking open a cold one with the boys”, or the act of hanging out with your male friends and drinking cold refreshing beverages.

2017 started off with a bang. On January 1st, unidentified pranksters changed the Hollywood sign to read “Hollyweed”. This is the second time that this has happened in the history of the Hollywood sign. So naturally, people decided to alter the sign themselves.

This meme has a special place in my heart, as one of my favorite versions of this meme was my Instagram bio for a long time. It’s popular on Twitter, and mocks overly enthusiastic and self-centered student athletes who make every conversation about themselves, their sport, and their dedication to it. It begins with someone saying something harmless and the student athlete replies by spinning the topic to themselves separating phrases with emojis. The meme has since expanded to spoof other types of students.

The dancing hot dog refers to the snapchat filter where you can have a dancing hot dog dance in your picture or video. It’s not my favorite meme but it was really popular this year, and you can see why.

“Cash Me Ousside / How Bow Dah” is a quote by 13-year-old Danielle Bregoli on an episode of The Dr. Phil Show, in which she challenges the show’s audience to a fight with the phrase “Catch me outside, how bout that?”. This meme is the most controversial on the list. It’s not one that I like, but it had a big influence on pop culture this year, so I couldn’t not include it.

3. The Floor is Lava

We all remember playing the floor is lava with friends or siblings when we were young. The idea resurfaced in the spring. It’s a two-panel photo series featuring showing a person avoiding the floor, as they would in It’s often used in regard to actions that people avoid, or sometimes things that people like. 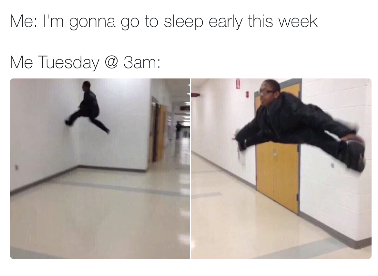 Last but not least, the Net Neutrality meme. One of the biggest controversies at the end of 2017 was the FCC’s vote on Net Neutrality. It was a big deal for internet rights in the United States and the people of the internet expressed their opinions in the best way they know how: through memes.

Links to the Memes:

Nothing But Respect for My President

Cracking Open a Cold One With the Boys Meme

Catch Me Outside, How about That? Meme

The Floor is Lava