I’m pretty sure by now we have all heard of what Logan Paul did. If you haven’t, he posted a vlog online when he went into a forest in Japan, Aokigahara, which is also known as suicide forest. Paul saw a dead body, and filmed it. It was clear that the person had committed suicide. Paul then went on and said, “This was supposed to be a fun vlog.” and “Suicide is not a joke. Depression and mental illness are not a joke. We came here with an intent to focus on the ‘haunted’ aspect of the forest.” He posted a public apology saying that he is human and he is allowed to make mistakes.

Now, after all the summary, he made a terrible move. Logan Paul went into the forest and saw a dead body. It was clear he knew that it was a dead body as he says something about how the person probably died that morning. Logan Paul officially disgusts me. Not only did he see the dead body and then kept filming, he also posted the video, on YouTube.  I understand that the title does say that they found a body in the forest, but many videos with titles like these are clickbait, so a viewer might believe that they will not actually see anything graphic of distressing.

Logan Paul also closely films the body in the video. According to the Verge, this causes suicide contagion. It causes people to copycat the moves he makes in the video. What he did also seems as him making a joke of suicide. I agree with what he said, “Suicide is not a joke.” And if he agrees with his own statement, he should not have kept filming the body or posted the video. I have read his apology letter and it seems insincere to the seams of the paper. I have watched his apology video and it seems sincere, and a real apology (Both are pictured down below). With all due respect Mr. Paul, I believe that you should not be crying over losing your followers and subscribers. You should really be upset about what you did. The video looks like you are crying over losing followers, well 1) grow up, and 2) stop crying over your “Logang.” You should actually be upset over what you did, and not the consequence. Think before you act, Mr. Paul. The phrase “look before you leap” really applies here. Maybe next time, if there is a next time, everyone should look before they leap, think before they act, and listen before they speak. Paul asks that no one defends his actions because they are not worth defending. I agree. Showing a dead body on camera, and posting it on YouTube is not okay. Posting a graphic, gory video, when most of your viewers are younger, is not okay. Logan Paul, I understand that you have apologized twice now, but why? Why did you do this? Why did you try to make suicide feel like a joke? Why did you film a dead body and put it in your YouTube Channel? 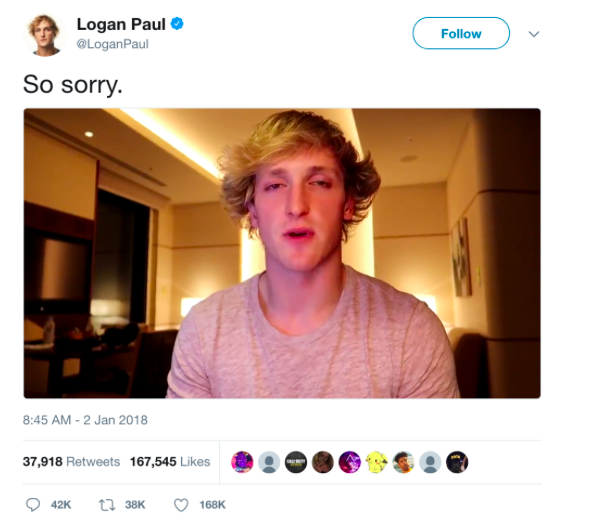 I would also like to point out that in his video, he says it was unplanned. I’m not trying to say that he was trying to film a dead body, but he went to a forest nicknamed “suicide forest.” Paul also went off the path, on an off trail, which you are not allowed to go on. Then Paul filmed the body, which is illegal in Japan. Paul broke many laws that day, on film, nonetheless. He also could have traumatized younger viewers and older viewers alike. He could have made someone’s life feel less important than it really is. So, if he didn’t expect to see something, then maybe he should have stayed on the trail. If he was really there for the haunted aspects of the forest, he should have stayed on the trail, it would have been a better experience for him, and his viewers.

Logan Paul should be removed from YouTube. Logan Paul and his brother, Jake Paul, have records of not doing the best things on YouTube, so honestly, I think they should have been removed before. YouTube has a process in which they go through to see if videos are appropriate. The raters are supposed to watch the video and then rate it on its graphic level, video and sound quality, as well as other things. The truth is that most of the raters don’t finish watching the videos. This may explain why this video was able to be uploaded to YouTube. But even if they did not finish the video, he says at the beginning that he saw a dead body and it wasn’t clickbait. Although this is very much Logan Paul’s fault for making a terribly graphic video, and it is his fault for uploading it, it is also YouTube’s fault for letting it be on their website. The Verge stated that, ‘YouTube issued a statement yesterday about the incident and said: “YouTube prohibits violent or gory content posted in a shocking, sensational, or disrespectful manner. If a video is graphic, it can only remain on the site when supported by appropriate educational or documentary information and in some cases [sic] it will be age-gated.’”

I believe that this behavior is unacceptable and should not be accepted. I do believe everyone’s opinions are valid, though. I am not trying to make anyone feel bad about what they believe if they still support that wastebasket Jake Paul.

If you ever feel suicidal, are contemplating self-harm, are depressed, or just need to talk, call the suicide hotline, 1-800-273-8255, or visit their website, https://suicidepreventionlifeline.org/.