Circuses and Cruelty (And Beyond)

Definition of a circus: A traveling company of acrobats, trained animals, and clowns that give performances, typically in a large tent, in a series of different places.

Definition of a circus: Lies.

Circuses have been embellished and developed as a popular theme and way of entertainment throughout the United States and the rest of the world. Many see a stage, talented and trained animals, a way to escape and have fun. They don’t see the horrors that lie behind the circus. They don’t see the horrendous conditions the animals suffer though. They don’t see all the ways they are abused. They only see what they are supposed to.

“To this day, the final performance with the elephants is the hardest performance I have ever had to go through,” a member of Ringling Brothers said. “I had to say goodbye to elephants I’d been with since they were born. They were part of my family.”

Reading the above passage struck me and stuck with me. This woman called the last performance with the elephants the hardest she’s had. For her, it was hard in a sense of saying goodbye, it was hard in the sense of change. For the elephants, it could not have been much of a goodbye, rather a hello. Each and every performance for them was hard, not only emotionally, but physically. While their hearts may have hurt and ached with each show being forced to do near the opposite of their nature, so did their bodies. The following pictures show some examples of the cruelty elephants face in the process behind putting on a circus show, particularly in Ringling Brothers. 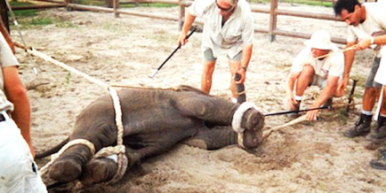 While many animal cruelties remain clear and evident in today’s society, we are improving. Along with the termination of Ringling Brothers, recently Sea World has declared this generation of whales to be their last. If you’re interested more in the abuse behind Sea World, you can check out one of my articles I wrote last year about it J (If you can tell, I sort of care about animals sometimes). Along with these strides forward, developments are being made that would greatly reduce the impact of factory farms in terms of the environment and the animals.

I speak a language unable to be heard,

I live in a hell where I have been burned.

I cannot speak but I can cry

If I cannot survive unharmed, I would rather die.

I wish I could look up and see the sky,

I wish I saw a sun, something that isn’t a lie.

I wonder why no one has ever cared

I wonder what burden they all bared

That they could ignore my endless pain

That they could ignore the love that kept me sane:

They took away my mother,

They slowly killed my brother,

They took away my heart,

We don’t speak the same language

But we breathe the same air.

We don’t have the same sized mind

But we both know how to care.

I hope your ticket brings you a smile

I hope your meat makes you full for a while.

I hope that each penny you’ve spent

Was worth each life you’ve bent

I hope that each family you’ve broken apart,

Each family you put in your shopping cart,

Each body you’ve sent to the non-existent tomb,

Each child you stole from her innocent womb.

I hope you are okay,

For there won’t be a day,

Where you will not pray,

For someone to say,

There is another way.

They do not have a voice,

So it is my job to speak.

They do not have a voice,

But they are far from weak.

Their lives are torture

Their deaths beyond bleak,

Someday we must end,

The above poem is dedicated to every single animal suffering from the abuse of human kind, whether it be tigers and elephants in circuses; wild animals in inhumane zoos; cows, pigs, and chickens facing the consequences of the dairy and meat industries; whales in Sea World. Too many lose their families, lose their ways of life, their ways to communicate, their ways to exist. Too many die in the most painful ways or watch their families die in the most painful ways due to humans. You can stop this. We all can.