What are people talking about for the Indians?

Our second pitcher Trevor Bauer has become infamous for hurting his finger while playing with a drone of his. At first I cast this aside as a dumb mistake but there is actually a cool story behind it. Before getting recruited as a MLB player Bauer was in college studying engineering, the man is a huge nerd and his love for the Star Wars movies led him to begin building his own drones. Which is very cool! Until one cuts your finger open and prevents you from pitching in the world series.

With Bauer out (and two of our other pitchers hurt and out for post season games) the Indians were in a bit of a pinch but we didn’t let that worry us. We brought in Ryan Merritt, a boy who has never played in a major league post season game before IN HIS LIFE and who absolutely killed it bringing us to the world series.

Names you should know

Lindor – Our shortstop and one of our best players. He is always seen smiling and jumping around. At 22-years-old this is only his second year with the Indians and MLB in general. “The Superstar”

Kipnis – one of the fan favorites, our second basemen and an all around amazing player. Arguably the “emotional leader”. Also he sprained his ankle while celebrating the team’s winning of the American League.

Santana – my personal favorite player, a designated hitter who caught the last ball to get us into the world series

Kluber “the klubot” – our number one pitcher. Known for showing absolutely no emotion. First Indians pitcher to strikeout the side (strike all 3 people out in one inning) in the world series and the only pitchers EVER to strike 8 batters in 3 innings of the World Series. 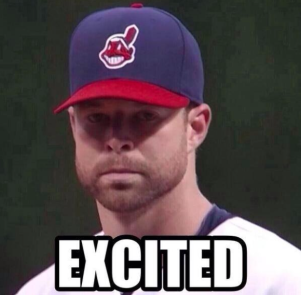 Napoli – our first baseman and amazing hitter. You may recognize the name from the slogan taken on by fans: party at Napoli’s (a slogan on a shirt that Alexandra Fuller owns)

Miller – Miller is one of our pitchers who won the MVP of the American League, he is a very down to earth and lovable guy.

Francona – the manager of the Cleveland Indians who the Red Sox fired because he wasn’t bringing them to the World Series so Cleveland picked him up and all has been going well.

Tom Hamilton – The radio announcer of the Indians, you can catch him on AM 1100. He is very well known for his energetic, engaging voice and just absolutely so much fun to listen too.

Slider – our very lovable mascot, it’s a little unclear what he actually is other than a big cute purple monster but he’s cute and energetic.